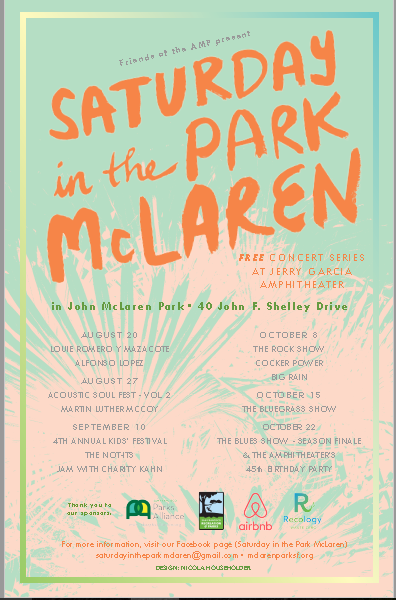 Coming back for their 4th year of successful free afternoon concerts, Friends of the AMP (Jerry Garcia Amphitheater in McLaren Park) announces 6 FREE outdoor concerts dates for the 2016 Saturday in the Park – McLaren music festival.

The Festival’s 6 shows run from  August 20th to October 22nd and, as in past years, offer music appealing to all ages and musical tastes, from salsa to blue bluegrass, rock, soul and more. The outdoor concerts also welcome back locals and fans of the bands, and introduce new concertgoers to San Francisco’s 2nd largest and natural park, the 318-acre John McLaren Park.

Friends of the AMP have been working closely with San Francisco Recreation and Parks to add new signage, repave the (free!) parking lot, and for dancing, a new smooth surface in front of the sta

August 20 – Percussionist Louie Romero y Mazacote kicks the Festival in gear at the first show with dancer-friendly blends of Salsa, Cha-Cha, Timba, Cuban Guajira and Puerto Rican Bomba. Added to the lineup is Alfonso Lopez performing songs encompassing many different styles of music from around the globe.

September 10 – The 4th Annual Kid’s’ Festival – Featuring The Not-Its, JAM with Charity Kahn, Tree Frog Treks, The Exploratorium, plus magic shows and nature programs, There will be 4 Hours (11am- 3pm)  of art, music, magic, science, hikes and dance and much more. Fun for the whole family to enjoy.

October 8 – Let the Good Times Rock’n Roll Show! Four virtuoso bands of great musicians will take you on a three and a half hour ride of dance and sing-along music when we welcome Cocker Power –A Joe Cocker Tribute Band, guitarist Lindsey Boullt, Pucci and the Pups band and Big Rain– a Rockin’ Country and Blues group.

October 22 – The Blues Show – our season finale concert once again offers a great lineup of local bay area blues performers, including the dynamic Tia Carroll and Bobbie “Spider” Webb. This final show also celebrates the 45th anniversary of the Amphitheater with the annual Saturday in the Park Amphitheater Birthday Party.

Kids in Parks and the students of Visitation Valley (VVMS) and Herbert Hoover (HHMS) Middle Schools are revitalizing neglected areas of the school grounds measuring more than 2,500 square feet, transforming them into a thriving habitat for local native plants and animals.

The totem species of this project is the Pacific Chorus frog, once found throughout San Francisco but now limited to one naturally-occurring population. The essential components of its habitat are small, shallow, ephemeral ponds for mating during the rainy season, and brushy areas of low growing native plants in which it lives during the dry season. Over the past five years, Kids in Parks has already successfully created six ponds at VVMS and HHMS. For the last five winters, frogs have returned to the ponds and reproduced. [Read More…]

Provide Your Input Online for the Yosemite Creek Daylighting Project

Thank you to those who were able to attend our Community Open House on October 2, 2013 and helped us identify the community’s priorities for daylighting Yosemite Creek near McLaren Park and the Louis Sutter Playground. We enjoyed meeting all of you from the neighborhood and gathering your feedback. If you weren’t able to make it to the community open house or were unable to finish the survey, you can still provide input online through the end of the month. Take the survey here today. It takes just a few minutes to learn about the project, give us your input, and contribute to the greening of San Francisco.

Mark your calendar for the first in the Discover Your Urban Watershed webinar series. Learn about SFPUC’s Sewer System Improvement Program and the role of the Urban Watershed Assessment planning process in this program. This webinar will focus on current conditions in San Francisco’s Islais, Sunnydale, and Yosemite watersheds. Join in and learn how you may get involved. The webinar will be held on October 24, 2013 from 12:00 pm – 1:00 pm. Please sign-up here.

The SFPUC is excited to announce an interactive workshop on Saturday, November 16 from 10:00am – 1:30pm at the Southeast Community Facility to help plan for necessary upgrades to San Francisco’s combined sewer system.    We especially want to make sure that folks from the southern and eastern sections of the City are represented.

This interactive workshop will take the form of a participatory planning game and focus on developing infrastructure solutions to sewer system challenges in three of San Francisco’s urban watersheds: Islais Creek, Yosemite, and Sunnydale.

Help us plan for healthy urban watersheds.  Click here for more information and to RSVP. Please note that space is limited and you must RSVP in advance.  Lunch will be provided.

If you cannot make it on November 16, there are other ways to get involved.  Also, please feel free to pass this along or suggest others who might be interested.   We would like at least one person from your organization—and the more the better!

We need your help to identify the community’s priorities for daylighting Yosemite creek, such as community space and nature habitat opportunities. Join us for the community meeting to learn about creek daylighting and tell us what you want to see! Stop by the community open house anytime to learn more and provide input, and meet at the Yellow House for a site walking tour at 5:30pm to walk the project site and get more details about the project. 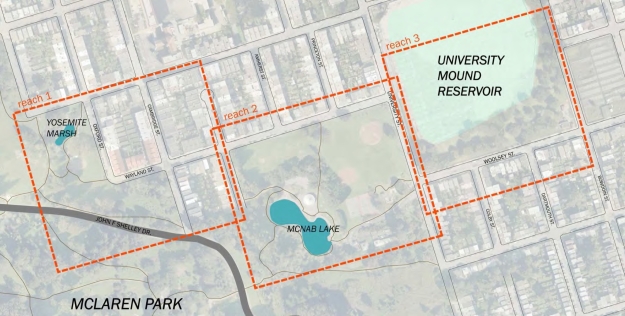 Be a part of the initial planning process, come see the planned changes and give feedback and voice your concerns.  Should the creek be day lighted?  How will this plan improve the play fields?  Will this plan ease storm water flowing down the sidewalks and street?

Linda D’Avirro, Chair of the City’s Parks, Recreation and Open Space Advisory Committee (PROSAC) and a volunteer with the McLaren Park Collaborative, elaborates:

What is really great is this project will involve YOU as the designers of what you would like to see to improve the overflow and water runoff problem while possibly day-lighting portions of the creek that runs through the park (and neighborhood) enroute to Yosemite Slough.

McLaren Park is the very first planned improvement project taking place over the next 20 years in the City’s other watersheds, so YOU can lead the way in the community vision for McLaren –enriching the habitat, restoring the paths and the marshes, fixing McNab Lake, improving the muddy soccer fields and many other projects. The PUC wants to work closely with the community as this project takes place and take the ideas from McLaren’s project forward to others.

There are planned community meetings starting in late-October to move this project forward as soon as designed. Please share this information with neighbors and others who may be interested in attending next week or future PUC meetings.

Light refreshments will be served. See you there!

The “Not-its!” and JAM with Charity Kahn @ Saturday in the Park – McLaren

The 4th Annual Kid’s’ Festival – Featuring The Not-Its, JAM with Charity Kahn, Tree Frog Treks, nature programs, The Exploratorium, magic show with Magician Mike Della Penna and “On the Move” Children’s’ Storybook Theater, There will be 4 Hours (11am- 3pm)  of art, music, magic, science, hikes and dance and much more. Fun for the whole family to enjoy.

Come early and bring a picnic! Fun kid activities including face painting, art table, and more begins at 11am. Snacks and beverages will be for sale.

Come join the family fun in the afternoon McLaren sun!

More music and information about the band at their website,

Latest event news at the Saturday In The Park Facebook Page

Save McLaren Park announces a new comprehensive electronic field guide to the plants and animals of the City’s second-largest park! It is based on iNaturalist crowdsourcing software for biological observations, and describes over 300 reported species within the park’s boundaries.

Maps are provided to locate each species in the park, and custom field guides may be printed or shared via PDF files – perfect for school field trips and nature walks! You can even search for species via your mobile web connection. See the “more” link at the top of the page for details on how to use the field guide, and for links to more park information.

Return of the Blues @ Saturday in the Park – McLaren

with The Stan Erhart Band / Alvon Johnson & the Allstars

Don’t miss an afternoon of pure delicious blues on the Jerry Garcia Amphitheater stage in San Francisco’s John McLaren Park. Come and hear these knockout bands for free on the very stage that helped launch the SF Blues Festival! 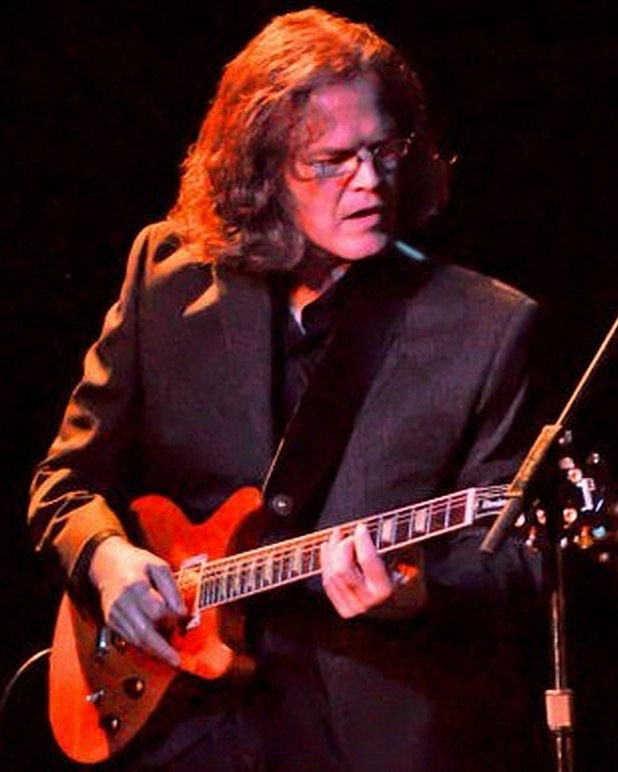 The Stan Erhart Band starts the show at 2pm. This eclectic group of musicians will dish up some of their sizzling signature grooves, covering blues/r&b, rock, soul, and jazz. Stan and his crew (Damon Hope on drums, Keith Crossan on sax, Pat T on bass) will be there from 1 pm on, so come out and hang with them! 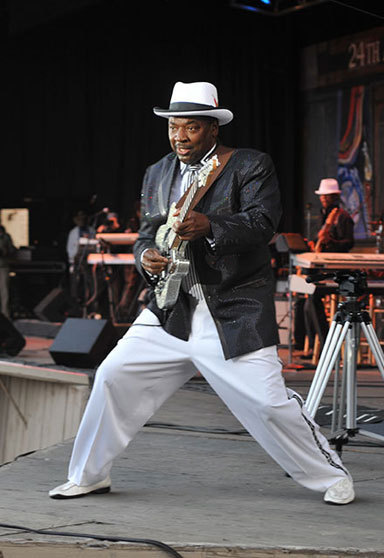 Then at 3pm, Alvon Johnson and his Allstars will keep the groove flowing with another power hour of soulful blues. Alvon has performed with many well-known artists, including The Drifters, The Shirelles, Bobby Day, and Otis Day and the Knights.

so don’t miss it!

At this week’s show starting at 1pm… there will free face painting and a kids art table. Children’s drawings will be made part of the stage display. We will give out free bubble bottles to the first 20 children!

PUT ON YOUR DANCING SHOES…

and HAVE A GOOD TIME partying to the BLUES!

Produced by The Bayview’s “SF Art Everywhere“, Friends of the AMP, and supported by the SF Recreation and Parks Department, SF Parks Alliance, and the offices of Supervisors Cohen, Campos, and Avalos. 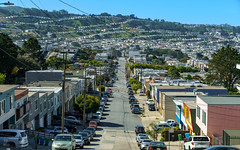